With the LitRPG Adventures Workshop DND Backstory generator (created by Paul Bellow), you can create backgrounds for 800+ race and class combos. The AI (GPT-3) will create a unique character backstory with the click of a button! You can check out the samples below, or click "Create Sample Backstory" to see another quick character background example of a random class, level, and race...

Xax was born into a clan of dwarves. They had a lineage going back hundreds of years. His clan specialized in mining and smithing. Xax grew up around the mines and under the care of his father. His father was the only member of the clan that was well-known for his fighting abilities. Xax learned everything he could from his father. Xax wanted to be a miner like his father, but the mine in his village was overrun by monsters. Xax tried to keep the monsters out of the mines, but they kept coming back. With nowhere else to go, Xax decided to leave his village. He started making his way north, looking for a new life. He wanted to be a fighter like his father. He wanted to help people and make a name for himself.

Xax’s attitude is hard and unforgiving. He keeps his feelings locked inside, rarely ever showing them. He has a very strict code of honor and believes that all people should be treated equally.

Xax is very tall for a dwarf, standing a head above his clan. He has a lot of muscle and tattoos. His face is scarred and he has a patch over one eye. His hair is jet black and he usually keeps it trimmed. He wears the typical armor of a ranger, preferring leather armor with some chain mail. He carries a few weapons, preferring to use a war hammer and short sword in battle.

Xax has decided to join the people of Grabisco in their fight against the Vinshaan, no matter the cost.

Scroll up to generate and list another DND character backstory for a random class and race combo, or join the LitRPG Adventures community today and try my DND character backstory generator for yourself... and all the other tools too! You can come up with a background for your magic items, monsters, or city locations. Also, you can get a background for a tavern, magic shop, or even a thieves' guild. I've got two generators for magic items. There's even two separate NPC generators. One for common NPCs and one for adventurer characters.

Generate all the results you want! You will be a backstory generating machine. In this day and age, AI is making it easier than ever to be creative. I've bundled all the best things about AI together and are offering those things to you on a silver platter. We currently have over 26,000 "things" in the RPG library on the site. With my tools, you can learn about your character's job, their fate, and more. Players and DMs love this tool. If you love DMs, tell them about this tool!

Drel Darkfire was born to a simple, happy family. His father was a blacksmith, and his mother was a farmer. He had an ordinary childhood. As a child, he loved to run around outside with his two siblings and play games. Every family member was happy. He had a curious mind and was always asking questions, which were sometimes funny and sometimes hurtful. One day, a strange man came to the town. He introduced himself as a merchant from Salis.

The man disappeared for a while and then returned... with a large group of soldiers. He said that the townspeople no longer belonged in their village, and he said they would have to leave or be destroyed. Drel’s father walked up to him and explained that they hadn’t done anything wrong, and they didn’t deserve to be treated this way.

The enemy smiled and told Drel’s father that he was right. He told him to kill as many as he liked and that he would still protect him. Drel’s father killed his wife and children and then turned the sword on himself.

He is a trustworthy and loyal friend. Despite his dark past, he still has an optimistic view of the future.

He has black, curly hair and intense eyes. He walks around in long, black, robes most of the time. Do you need more of a description?

He is traveling the land to find a better way of life.

Menna took her role very seriously. She was known for her fast healing abilities. She would move into the infirmary of whatever monastery she was assigned and help with all sorts of mundane tasks in addition to learning from the masters there.

The skills she gained in the monastery are the few skills she now uses to help the innocent and fight evil. This is her lifestyle.

Menna has a very strong moral compass. She has always focused on helping others. She can also be greatly swayed by peer pressure. Her peers will try to talk her into bad decisions, but she will often refuse to budge until her peers present more persuasive arguments.

She believes in the power of the individual to make the right choice, but she will often go along with whatever the group thinks is right.

Menna is short and round, with long brown hair that is usually tied into a bun on top of her head. She wears simple clothing, usually robes, that are easy to move in.

As a shadowknight, she wields a two-handed weapon nearly as tall as she is. She fought her first battle against the acolytes of Zan, and while she didn’t win, she was instrumental in helping bring down a few of the powerful necromancers and their undead allies. (She's friend with a Duke because of that battle...)

Menna hopes to one day become an empress of the world, bringing peace and prosperity to all of Grabisco and beyond. 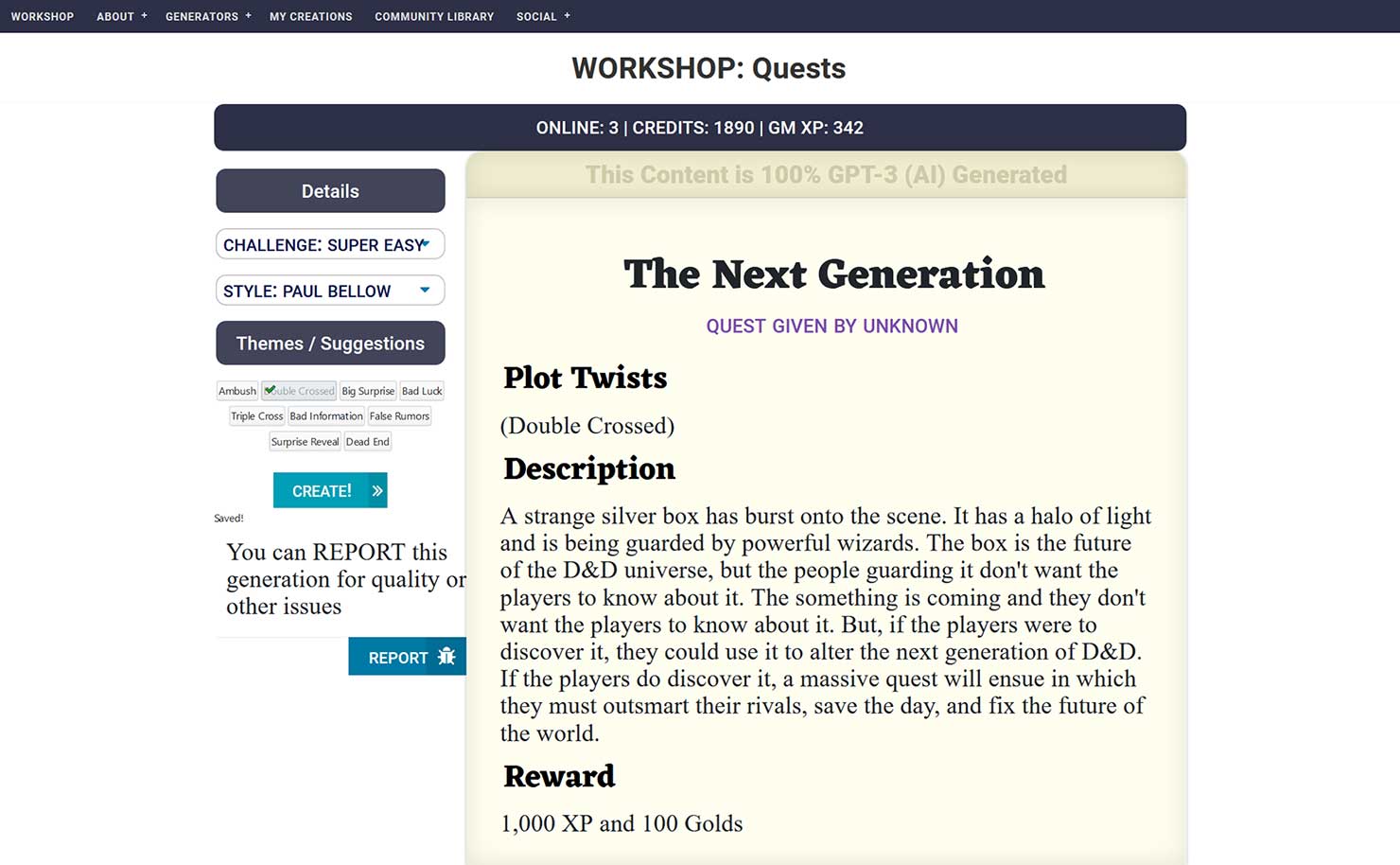 If you like the looks of my D&D character backstory generator, register now and start using it today to generate hundreds of DNDcharacter backstories! Or browse the site to see more samples... I started using GPT-2 for D&D and RPG tools a few years back, and I was one of the first people to get access to the Davinci GPT-3 large language model. After fine-tuning GPT-2 more than once, I've now fine-tuned GPT-3 output for D&D content too. The future is bright for AI gaming and RPG tools. (And random tables books! I've branched out beyond a simple backstory generator. They're not making me a lot of wealth, but I've had fun making them.)

I'm Paul Bellow, by the way, a LitRPG author, developer, D&D player and DM for decades, and creator of this website with all sorts of character backstory ideas. I hope you enjoy at least one of my RPG generators. From character backstories to my monster generator to every other backstory generator I've created, I've got a wealth of RPG generators for every tabletop gamer. (Well, the ones that have lived up to my ideals. I've scrapped a few RPG ideas along the way.) They're just the starting point, though, and need a creative and experienced DM - like you. Stop writing character backgrounds on your own and leverage the power of AI to help your tabletop gaming experience with tons of interesting details.

(And tell a family member, your parents, a loved one, or even close friends too! I've poured my heart into this backstory generator, and I'd love to help even more people with fun character ideas...As an author, I love making people happy, even parents.) In all seriousness, click the REGISTER button to get access now. You can generate more and more backstories with monthly credits or buy just a set time period to access the backstories generators and our growing text library of great backstories and other RPG content. There's more to come too.

May all your rolls in the game be natural 20s! This is the way... to better D&D backstories for all! (And MERPs too! Now there's a tabletop game...)

Here are links to other examples of fantasy tabletop RPG content created with the LitRPG Adventures Workshop.

Suitable for Dungeons & Dragons, Pathfinder, or other tabletop role-playing games, we've got a treasure vault of RPG content waiting for you.